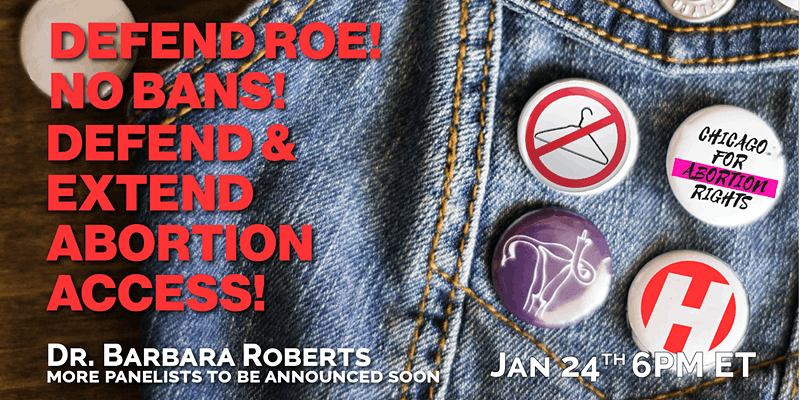 Join us for a conversation on the fight to defend abortion rights in honor of the anniversary of the historic Roe v. Wade decision.

January 22nd is the 49th anniversary of the historic 1973 Roe v. Wade decision that decriminalized abortion, a decision that now is on the chopping block after decades of rulings that have limited access to abortion. The Supreme Court is reviewing a Mississippi 15-week abortion ban case while it has allowed Texas to outlaw abortion after just six weeks and empower vigilantes to enforce its ban. All are designed to roll back if not overturn Roe all together.

How can we mobilize the majority that still defends Roe?

***Register through Eventbrite to receive a link to the video conference on the day of the event. This event will also be recorded and live captioning will be provided.***

Dr. Barbara Roberts, MD was the first female adult cardiologist in the state of Rhode Island. She graduated from Barnard College, Class of ‘65 and Case Western Reserve School of Medicine in 1968. As a resident at Yale New Haven Hospital, she became active in the pro-choice movement, before Roe v Wade made abortion legal. She helped found the Women’s National Abortion Action Coalition (WONAAC) and was the keynote speaker at the first national pro-choice demonstration in Washington DC in November 1971. She also was active in the anti-Vietnam War movement, and spoke at the last mass anti-war demonstration on the grounds of the Washington Monument on the day of Nixon’s inauguration in 1973. She did her cardiology training at the Brigham & Women’s Hospital. She was a staff physician at Planned Parenthood for many years, and continues on the voluntary faculty at the Warren Alpert Medical School of Brown University where she is an Associate Clinical Professor of Medicine Emerita. She founded and directed the Women’s Cardiac Center at the Miriam Hospital in Providence, RI from 2002 to 2016. She is the author of How To Keep From Breaking Your Heart: What Every Woman Needs to Know About Cardiovascular Disease, (Jones & Bartlett, 2004, second edition 2009), The Truth About Statins: Risks and Alternatives to Cholesterol-Lowering Drugs (Simon & Schuster, 2012) and The Doctor Broad: A Mafia Love Story (Heliotrope Books 2019).

***More panelists to be announced soon.

This event is sponsored by Chicago for Abortion Rights and Haymarket Books. All donations from this event will go to the Chicago Abortion Fund.